In the 1940's, Dr. Ingalls was in the Nevada mountains studying rock formations when he ran across a glowing stone. He determined that it was a meteorite that had crashed to Earth millions of years ago. He carefully lifted the meteorite using gloves and placed it in his car. He takes the meteorite home to his lab to study. In his lab, Dr. Ingalls carefully begins examining and testing the meteorite. It is made of a metal not naturally found on Earth.

Later, Dr. Ingalls shows the meteorite, now encased in glass, to his family. His wife, Sabrina, and sons, Foster and Russell, are amazed by the space rock. Dr. Ingalls explains that it is late and it’s time for bed.

That night, the meteorite glows brighter, and its energy begins to travel through the air. It reaches each member of the family and surrounds them as they sleep. When they awaken, each one discovers changes to themselves. Dr. Ingalls has grown large wings and has incredibly sharp vision. Sabrina is freaked by her husband but can hear the thoughts of her family and realizes something isn’t right with her boys and rushes to check on them. Entering their room, Sabrina sees Russell holding his bed over his head and Foster is freezing his glass of water. Russell has primate hands and feet. She faints.

When Sabrina comes to, she again freaks out about what has happened. Not only can she hear the thoughts of her family, now, due to her anxiety, she begins arcing off electrical energy, shorting out electrical devices in the home. Once she calms down, Dr. Ingalls gives the explanation that it must be the meteorite that did this to them.

He enters the lab to find the meteorite no longer glowing. He removes the glass and touches it. He feels a pleasant “rush” through his body, as if recharged. Dr. Ingalls gathers his family and tells them that this must be kept as secret. Just then, his wings begin to shrink into his back. He tells them that no one can know and they make a pact.

Sometime later, the war has come home, and Dr. Ingalls realizes that something needs to be done. He again gathers his family and tells them that they need to join the superheroes to protect America. They make costumes and call themselves the All-Patriots, and they join the battle for continued American freedom. 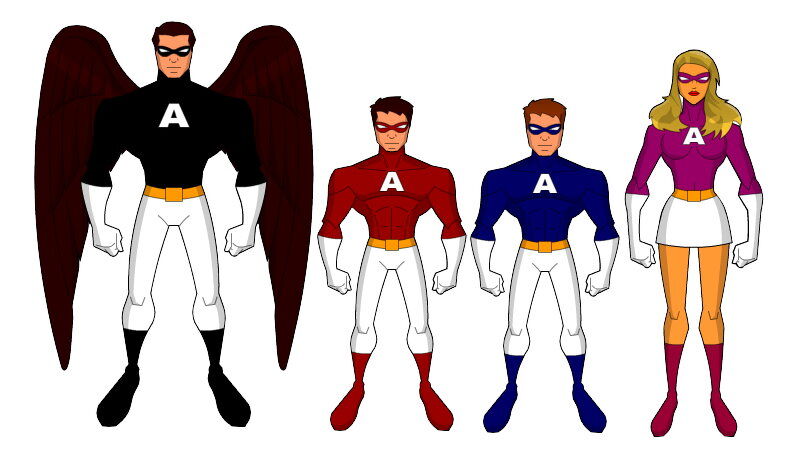 ALL-PATRIOTS are an "Open-Source Team of Characters" and have been deemed so, specifically, for use by anyone by the original creator. The only rule about using them is that your work must have this notation:

"The characters of the ALL-PATRIOTS are available for use by anyone, with only one condition. This paragraph must be included in any publication involving the ALL-PATRIOTS, in order that others may use this property as they wish. All rights reversed."

EAGLE MAN, SHOCK GIRL, KID COLD, and KID PRIMATE are "Open-Source Characters" and have been deemed so, specifically, for use by anyone by the original creator. The only rule about using him is that your work must have this notation:

Retrieved from "https://pdsh.fandom.com/wiki/All-Patriots?oldid=88130"
Community content is available under CC-BY-SA unless otherwise noted.