Lucille Martin was an adventurous novelist on a return trip to her fiance, Larry's, estate from China, where she was researching for her next book. On the ship she befriends a Chinese Woman named Lotus, who works as a Maid for Chin Liang. Her master sent her on the ship with a mission to deliver a Jade Idol to his associate Sing Thang. To protect the Idol, Lotus entrusts it to Lucille with the instructions to deliver it should something happen to her. Lotus also gifts Lucille The Blue Bird Ring, which is said to have super human powers. 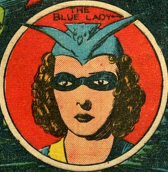 Later in the voyage Lotus is secretly murdered by a group of men. The next day Lucille finds Lotus's room ransacked and hides the Idol. Back at her fiance's estate, Lucille carelessly drops the ring and steps on it releasing a strange gas that knocks her unconscious. When she awakens she finds she has Superhuman Strength. After scoping out the place she was to deliver the Idol, and finding it crawling with thugs, she returns home and puts together a costume to hide her identity and takes the name The Blue Lady, after the ring that gave her the powers.

In her second appearance her abilities are temporarily neutralized by thugs pouring oil on the ring, her powers return when the ring is cleaned. In her third appearance facing men working for The Trigger she discovers the ability to evaporate into a mist, and to use the mist to render herself invisible.

Retrieved from "https://pdsh.fandom.com/wiki/Blue_Lady?oldid=97233"
Community content is available under CC-BY-SA unless otherwise noted.