Introduced in Chapter IV ("Rabbit Sends in a Little Bill") and the main center of interest of Chapter V ("Advice from a Caterpillar"), the Caterpillar is a hookah-smoking caterpillar exactly three inches high which, according to him, "is a very good height indeed" (though Alice believes it to be a wretched height).

Alice does not like the Caterpillar when they first meet, because he does not immediately talk to her and when he does, it is usually in short, rather rude sentences, or difficult questions.

The original illustration by John Tenniel at right, is something of a visual paradox; the caterpillar's human face appears to be formed from the head and legs of a more realistic caterpillar. In another allusion, the flowers on the right of the illustration appear to be a form of tobacco, while the caterpillar is smoking heavily. 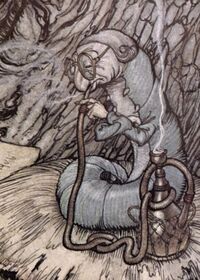