Jack Horner is the protagonist of the Eighteenth Century nursery rhyme “Little Jack Horner” as well as of a subsequent chapbook that portrays him as a sort of heroic prankster who slays a giant and who punishes dishonest people by using his coat of invisibility and his magical bagpipes. (Says the chapbook, “Whene’er he took a ſword in hand, / He made his foes to bleed.”) By the middle of the Nineteenth Century, however, his heroic exploits were mostly forgotten and further appearances usually portray him only as the little boy from the rhyme (although “What Jack Horner Did” and The Luck of Santa Claus do portray him heroically). By far, his strongest association is with pie, which he is eating or holding, or which is at least mentioned, in nearly every appearance.

Jack Horner is a variation of the archetypal stock folk hero Jack, and indeed some of his adventures are apparently derived from those of the character Jack in “The Friar and the Boy” as well as Jack the Giant Killer. Different variations of the Jack archetype are also often portrayed as separate characters; for example, Jack Horner meets and interacts with Jack and Jill, Jack Sprat and Nimble Jack in multiple stories, and he meets Jack Frost in The Luck of Santa Claus.

The popular English‐language nursery rhyme “Little Jack Horner” describes the unusual thing Jack does while eating a plum pie. The most common modern words are:

Little Jack Horner
Sat in the corner,
Eating a Christmas pie;
He put in his thumb,
And pulled out a plum,
And said 'What a good boy am I!'

According to The Pleasant History of Jack Horner, Jack lives near London and is “A pretty boy, a curious wit, / All people ſpoke his praiſe.” His sitting in a corner and pulling plums from a pie is an annual Christmastime tradition of his childhood years. In “The Discouraging Discovery of Little Jack Horner,” it is Jack’s sister who bakes the famous pie, but Jack breaks a tooth on a plum stone accidentally left within it. In The Renowned History of Little Jack Horner, Jack encounters a beggar while on his way to school and sends her to his home so his mother can give her his leftover pie. So impressed is his mother with his charitable nature that she and his sister Patty Horner bake him a fresh new pie. In “There Was a Boy Who Lived on Pudding Lane,” Jack lives in Cole’s kingdom along with other nursery rhyme characters and is one of the children rescued by Santa Claus after being entranced by the villainous Pied Piper. In The Luck of Santa Claus, Jack Horner lives in Mother Goose Land but flies to Santa Claus Land on the back of one of Mother Goose’s wild geese in order to help her and other nursery rhyme characters to deliver presents on Christmas Eve after Santa and his reindeer are injured in a sleighing accident. In The Modern Mother Goose, Jack lives in Gooseland and is one of the children who attend Mistress Mary’s party on the moon. In The Strike Mother Goose Settled, Jack denies ever having pulled a plum from any pie, saying that the nursery rhyme is inaccurate, but it is revealed that the pig stolen by Tom, the Piper’s Son, which had only been taken temporarily as a prank, actually belonged to Jack. Mother Goose’s Melody suggests that Jack may have eventually become apprentice to a minced pie maker.

In “What Jack Horner Did,” Jack is an orphan being raised by his poor grandparents “in an old tumble‐down house at the edge of a big wood.” One day, Jack rescues a man from drowning in a nearby bog; it turns out that the man is quite wealthy and, in gratitude, lavishes gifts and gold coins on Jack and his family. Elated by Jack’s heroism and the resulting good fortune, Grandma Horner is inspired to bake him a plum pie on the day before Christmas.

In Boy Blue and His Friends, a book that gives more realistic origin stories to various nursery rhyme characters by portraying them as average schoolchildren in the United States, Jack Horner’s real name is Jack Horne, and he is the one responsible for inadvertently letting Mary’s lamb Fleecy into school by arriving late and leaving the school door ajar. The “Christmas pie” is actually a fake pie fashioned by his mother for a party at their home, with the “plums” inside being wrapped party favors for the guests. Jack’s plum contains a watch so he would not be late to school again.

In “The Christmas Conspiracy,” Jack Horner and other characters live in a huge book of nursery rhymes in the home of children Harry, Nell, Bobby and Dot where he participates in a lighthearted plot on Christmas Eve to “capture” and confront Santa Claus to ask why he doesn’t bring gifts to nursery rhyme children. So confident is Jack that he will get the pie that he wants for Christmas that he gives his old pie to Simple Simon, saying “I picked out all the plums years ago.” Jack indeed receives a new pie from Santa, which is visible thereafter in the book in which he lives. It is also implied that Mother Goose is genuinely Jack’s mother.

In The New Woman in Mother Goose Land, Jack Horner is the brother of Tom, the Piper’s son, and by inference, is also himself the Piper’s son (and the Piper is Mr. Horner). Mrs. Horner is a busy suffragette who henpecks her husband and leaves Jack to care for his little sister, Rockaby Baby.

In The Pleasant History of Jack Horner, Jack matures to become “proper, ſtrait, and trim,” and many young women fall in love with him. Curiously, he is described in three chapters as being only thirteen inches tall, although some of the woodcuts seem to depict him as a young man of normal height. By the time he is twenty, Jack is living with a knight and serving as his page “To yield him much delight.” Donning a goatskin at midnight, Jack breaks into the home of a dishonest tailor and terrifies him by pretending to be the Devil. He later has a bizarre altercation with his master’s cook Joan in which she hits him on the head with a ladle and he goes under her skirt to bite her on the leg and posterior. A cave‐dwelling hermit gives Jack a coat of invisibility and magical bagpipes that compel anyone who hears them to dance and follow the music, and Jack soon thereafter uses them to punish six fiddlers and six peddlers, whom he believes to be dishonest, by leading them over rough terrain so they tear their coats and trousers and break the instruments and glasses they were carrying, and then again when he exposes his friend’s unfaithful wife as having an affair with a neighbor. In the final chapter, in a clear conflation with Jack the Giant Killer, Jack Horner slays the tremendous fire‐breathing giant Galligantus by using a five‐inch sword and his magic bagpipes, and then marries the daughter of a knight who had proffered her as reward.

Jack Horner is Jack's best man in The Marriage of Jack and Jill. 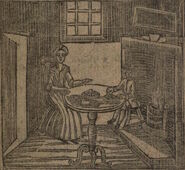 Cover illustration for The Pleaſant Hiſtory of Jack Horner, ca. 1790. 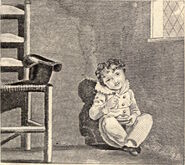 “Little Jack Horner,” illustration for Songs for the Nursery, [1808?].

Illustration for The Renowned History of Little Jack Horner, before 1829.

Illustration for The Amusing History of Little Jack Horner, ca. 1831. 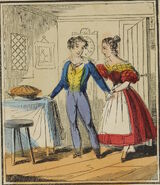 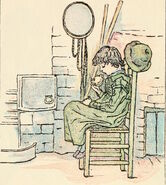 “Little Jack Horner sat in the corner,” illustration by Kate Greenaway for Mother Goose or the Old Nursery Rhymes, [1881?].

“Jack Horner,” illustration by Maxfield Parrish for “What Jack Horner Did,” in Mother Goose in Prose, 1897. 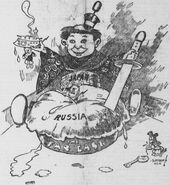 “Then he had put in his hand and pulled out something,” illustration by Maud Tousey Fangel for Boy Blue and His Friends, 1906.

“Little Bo‐Peep and Her Sheep,” illustration by Emma Bell for Rimes and Stories, 1910. 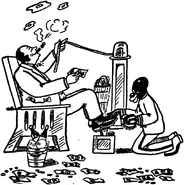 “Little Jack Horner,” illustration by E. Boyd Smith for The Boyd Smith Mother Goose, 1919.
Add a photo to this gallery

Retrieved from "https://pdsh.fandom.com/wiki/Jack_Horner?oldid=82179"
Community content is available under CC-BY-SA unless otherwise noted.