After his father was killed, Judex set out on a crusade against crime, assisted by his mother, his younger brother, circus folk and redeemed criminals. He was skilled in fighting, was a master of disguise and had some hypntoic abilities. He is tall, with black hair and he wears all black with a cloak and slouch hat. He flew a plane and had a secret lair beneathe a castle where he kept his prisoners and interrogated them via "television." He sought revenge against Favraux, a corrupt banker, who killed his father, but he spared his life for the sake of Favraux's innocent daughter Jacqueline Aubry whom he had fallen in love with. 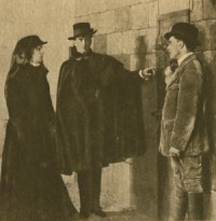