Then the Queen left off, quite out of breath, and said to Alice, "Have you seen the Mock Turtle yet?"
"No," said Alice. "I don't even know what a Mock Turtle is."
"It's the thing Mock Turtle Soup is made from," said the Queen.

Carroll enjoyed such puns on Victorian fashions and etiquette, and showed this frequently. The description and drawing by John Tenniel gives comedic value to the Mock Turtle, as he is clearly an assemblage of creatures, therefore not a real turtle as his name rightly suggests.

The Mock Turtle is a very melancholy character, it is thought because he used to be a real turtle. He tells Alice his history of going to school in the sea, but cannot understand the school system that Alice describes to him - least of all the poetry she recites. Ironically, she cannot understand it either. This is a pun on the two meanings of "school", referring in the turtle's usage to a school of fish or marine animals, and by Alice to an institute of learning. He says the teacher was an old Sea Turtle called Tortoise and when Alice asks him why he was called Tortoise if he was a Turtle the Mock Turtle answers "We called him tortoise because he taught us!" 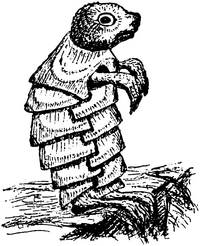