The character has multiple origins:

The first, a version of a folk tale about a girl made of snow and named Snegurka was published in 1869 by Alexander Afanasyev in the second volume of his work The Poetic Outlook on Nature by the Slavs, where he also mentions the German analog, Schneekind ("Snow Child"). In this version, childless Russian peasants Ivan and Marya make a snow doll, which comes alive. This version was later included by Louis Léger in Contes Populaires Slaves in 1882. Snegurka grows up quickly. A group of girls invite her for a walk in the woods, after which they make a small fire and take turns leaping over it; in some variants, this is on St. John's Day, and a St. John's Day tradition. When Snegurka's turn comes, she starts to jump, but only gets halfway before evaporating into a small cloud. Andrew Lang included this version as "Snowflake" in The Pink Fairy Book in 1897.

In another story, she is the daughter of Spring the Beauty and Father Frost, and yearns for the companionship of mortal humans. She grows to like a shepherd named Lel, but her heart is unable to know love. Her mother takes pity and gives her this ability, but as soon as she falls in love, her heart warms and she melts. This version of the story was made into a play The Snow Maiden by Aleksandr Ostrovsky, with incidental music by Tchaikovsky in 1873.

In 1878, the composer Ludwig Minkus and the balletmaster Marius Petipa staged a ballet adaptation of Snegurochka titled The Daughter of the Snows for the Tsar's Imperial Ballet. The tale was also adapted into an opera by Nikolai Rimsky-Korsakov titled The Snow Maiden: A Spring Fairy Tale in 1880–81.

In the late Russian Empire, another origin for her came about. Snegurochka was part of the Christmas celebration, in the form of figurines to decorate the fir tree and a character in children's pieces. At this time, Snegurochka became known as the granddaughter of Ded Moroz (the Russian Santa Claus) and became his helper.

In “The Little People of the Snow,” the Snow Maiden is a fairy character who befriends a mortal girl named Eva and guides her through the snow; however, the Snow Maiden forgets that a mortal cannot withstand the low temperatures in which she thrives and is horrified when Eva perishes. This is a reversal of the usual storyline, in which the Snow Maiden survives but her loved one dies.

In “The Snow‐Maiden: A Legend of the Alps,” a man meets and falls in love with an adult Snow‐Maiden who introduces herself as Niègette. When he attempts to carry her from her snowy mountainous home to wed her, she gradually melts into nothingness.

In “The Secret,” a man has obsessive visions of the Snow‐Maiden and sets off to find her, but when he finally meets her, her gaze freezes and kills him.

In a number of poems, the Snow Maiden is little more than an allegorical personification of snow. The character Miss Snow serves a similar function in The Christmas Chain.

According to the 1864 poem “The Snow Maiden,” “Her shoulders bare, gleamed white, / And were bright, but cold to see; / The curve of her shape was wavy / As snow‐wreaths curling free. // Icicles were her eyes, / And her body glittered fair; / What, but wreaths on the frosted pane, / Could gleam as gleamed her hair?” The 1877 poem of the same title describes her as “A dainty maid … / All in a feathery robe of white, / Decked o’er with green and berries bright; / And round about her braided hair / A wreath of myrtle doth she wear,” and says she “sings a song for men to hear, / Of purity and purpose high, / And deeds of unknown chivalry.” The 1921 poem “The Fir Tree and the Snow” describes her as the tree’s “fair white bride” wearing a “fleecy gown,” and that “Her robe was white as the folds of a shroud.”

The Japanese version of the character is the snow spirit Yuki‐Onna, who can kill mortals by breathing on them.

Of the daughter of Ded Moroz (a.k.a. Daughter of the Snows, Snégurotchka, Frija)

In some public domain translations, the Snow Maiden has been called Snow‐White and Snowwhite. She is, of course, not to be confused with Snow White (originally Sneewittchen) or the similarly-named (originally Schneeweißchen) sister of Rose-Red. 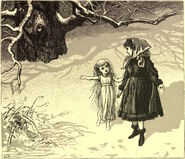 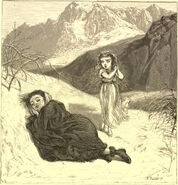 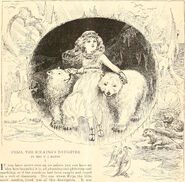 “The Snow Maiden,” illustration by Henry Justice Ford for “The Snow‐Daughter and the Fire‐Son,” in The Yellow Fairy Book, 1894. 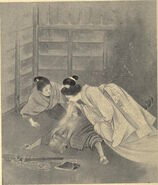 “‘Who are you?’ Ivan gasped in surprise,” illustration by Frederic Richardson for “The Snow Maiden,” in Old Russian Tales Retold for Children, 1916.
Add a photo to this gallery

Retrieved from "https://pdsh.fandom.com/wiki/Snow_Maiden?oldid=82186"
Community content is available under CC-BY-SA unless otherwise noted.