Selena Brown was an orphan girl who lived on a farm and had a great fear of the moon. One night, while cleaning the attic, she came upon a magic Moon-Jewel necklace which gave her incredible strength. She uses this gift in a variety of ways that catch the attention of the media and Moon Girl.

Eventually, she wound up saving two hardened criminals from a possibly fatal accident. Seeing how useful she could be to them, they force her to help them break into a bank by threatening to kill her foster parents if she refuses. She complies.

When Moon Girl intervenes, the thieves shove Selena into the bank vault, where she starts suffocating. She is eventually rescued by Moon Girl, who is revealed to be her cousin. (Selena's mother, also named Selena, was Moon Girl's aunt.)

Given the secret identity of "the Starlet," she joins Moon Girl as her sidekick. 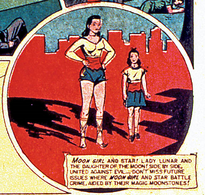 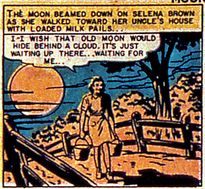 Add a photo to this gallery

Retrieved from "https://pdsh.fandom.com/wiki/Starlet?oldid=97003"
Community content is available under CC-BY-SA unless otherwise noted.