Virginia Thompson was engaged to the hero Doc Strange. Her father, Professor Thompson, was the inventor of the Delta Ray Gun. The Delta Ray Gun was a powerful weapon that could destroy anything its red ray touched it could even stop tanks and battleships.The secret of the ray was coveted by the Faceless Phantom so he had Virginia's father kidnapped. The Phantom's plans were stopped by Doctor Strange. After this Virginia accompanied Doc on many of his adventures, assisting him and his sidekick Mike. 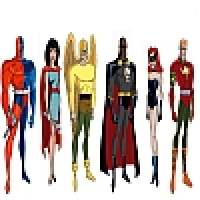